Traditionally, 7 Days To Die servers are configured as PVP servers, or PVE servers, but using a combination of CSMM and CPM, you can create a special kind of hybrid server with areas where players can kill each other freely, and areas where killing of other players comes with a configurable punishment. There are several important criteria that admins must be aware of when configuring a server in the PvPvE style of gameplay:

With these restrictions understood, you can begin to configure your server.

There are several configuration settings that define the behavior of a PvPvE server.

This setting has 4 possible values:

If you wish to completely prevent griefing behavior in your PVE zones, you should configure your LCB settings as shown above. Be aware, however, that these settings prevent anyone from damaging a base protected by a land claim block, even in the PVP area. If you wish to allow bases in the PVP zone, you will have to use different settings, and utilize CSMM Location Tracking to chase down people who grief bases in the PVE zone.

The PVE region claim is the most complicated part of the server setup. A PVE claim is simply a Notify Advanced Claims with an extra parameter, known as the punishment parameter. A PVE claim looks something like this:

There's a lot going on in this claim command, so we'll take it section by section. 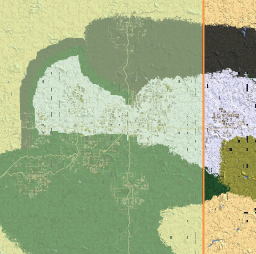 You can use ANY coordinates for your PVE region, you aren't restricted to East-West or North-South. See the Examples section below for some more coordinate combinations.

Note: Each segment (enter/exit/punish) is separated by a colon ( : ), while multiple separate punishment commands are separated by a semicolon ( ; ), make sure you get these characters correct!

Once you've established your PVE zone, it's important to understand how punishment works for kills. The logic is very simple: if both players are in the PVE zone and one kills another, the killer is punished. Using the above map example, we have the following slice of the map shown in the screenshot. The left side (green) is PVE, and the right side (red) is PVP. Given that setup, the following kill scenarios can occur:

It makes sense that PVP to PVP kills are always permitted, but you should notice that it doesn't matter who kills who if the players are on opposite sides of the line. PVE players can kill PVP players, and PVP players can kill PVE players. This means that if you are a PVE player and want to avoid any chance of PVP, you need to stay away from the border. There's no fixed distance that is safe; if you are in PVP and can see a PVE player across the line, you can try to kill them. Most players can see approximately 200 units away on a clear, flat space, but weapons are rarely accurate at that distance. As a result, if you stay at least 200 units away, you are usually safe.

This section is optional, but is intended to help your players understand where they are in the world. In the previous section, it explains that simply being within visible range of the PVE/PVP line can be deadly. However, players themselves can't actually see the border, so unless they're constantly watching their map, they have no real way to know how close they are. The DMZ Warning Zone solves that problem.

Using a standard Notify claim, you can place a warning message around the PVE/PVP line so that people know they're getting close. In other words, as people near the edge, it will warn them to be cautious; players in PVE getting close may be vulnerable to being killed, and players in PVP that are getting close to the line might accidentally get punished if they step over the line and kill someone.

Using the above example for the PVE/PVP line at 2500E, this DMZ warning starts at 2300E and ends at 2700E, giving a 200 meter buffer on both sides of the line to warn players they are getting close. The message is not different depending on which side of the line you're on, it just warns you that the line is nearby. Also, the DMZ warning does not change the rules of PVE punishment in any way, it ONLY notifies the players about their proximity to the line.

Note that the access level of this claim is -1 instead of 1; it will apply to all players, including Admins. This is simply so that Admins also receive the warning when they're near the edge. This claim does not trigger punishments.

This feature is only useful on servers with a PlayerKilling mode of 3 where anyone can kill anyone at any time, even if the two players are allied. Leaving PKM at 3 encourages players to be more careful because they can accidentally kill their allies in huge fights. However, on servers with a PKM of 3, you may not want to also punish the killer for accidentally killing an ally. The NPF parameter prevents the punishment command from going off if a player kills another player who they are in-game friends with. Note, they must be friends, not just groupmates.

Configuration is very simple: when creating your PVE zone, add the letters 'npf' (case sensitivity does not matter) anywhere in the claim name. In the example above 'pveNPFZone', allied players who kill each other will not be punished. Simply changing the name to 'pveZone' would remove that protection.

See above documentation. Simply change the second number of the first set of coordinates (2500) to the point where you want the line to be.

Similar to the East-West setup. Change both of the numbers in the second set of coordinates to match where you want your line to be. This screenshot has the line at 1100S. 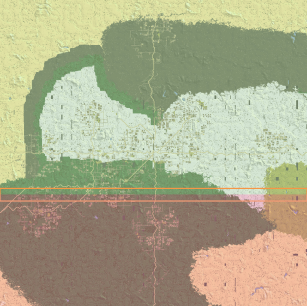 In the screnshot below, the inner 2K diameter square is PVE, the next 200 units in all directions are the DMZ zones, and the remainder of the map is PVP. Note the black lines on the DMZ zones; there are 4 separate zones that make up the area around the inner square. Players who move around the 4 corners of the DMZ area will receive a message each time they move from one zone to the next, and there's no way to prevent this. 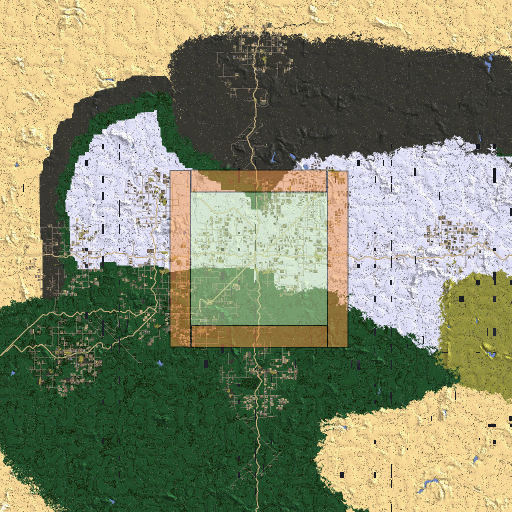